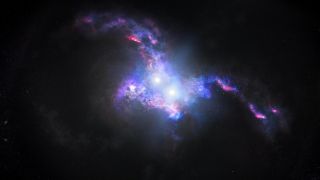 An artist’s impression of the light emitted from the two quasars nestled in colliding galaxies.
(Image credit: NASA, ESA, AND J. OLMSTED (STSCI))

NASA’s Hubble Space Telescope has captured not one but two pairs of distant quasars that existed some 10 billion years ago, a new study reports.

According to the team leading the research, the discovery was like finding a needle in a haystack, as the chance of locating a double quasar compared to a single quasar is just one in 1,000.

Imagery captured by the long-serving space telescope shows that the quasars within each pair are only about 10,000 light-years apart. For comparison, our sun is 26,000 light-years away from the supermassive black hole at the heart of the Milky Way. The researchers, led by Nadia Zakamska of Johns Hopkins University in Baltimore, Maryland, believe that the quasars are knitted so closely to each other because each pair lies at the center of two galaxies in the midst of a smashup.

A quasar is an intense emission of light from the center of a galaxy that’s fuelled by the gluttonous supermassive black hole at its core. “Quasars make a profound impact on galaxy formation in the universe,” Zakamska said in a statement released on April 6.

When two galaxies collide, their intense gravity causes the structures to become warped. More material is funneled into their respective black holes as a result, igniting their quasars. Over time, the intense radiation fuels galactic winds that strip away most of the gas from the merging galaxies.

This process results in the formation of an elliptical galaxy. A similar sequence is predicted to happen a few billion years from now when the Milky Way merges with its nearest galactic neighbor, the Andromeda galaxy.

More than 100 double quasars have been discovered in merging galaxies, though none are as old as the two pairs found in this study. The newly discovered quasars are from an era associated with an abundance of quasar formation, about 10 billion years ago. Astronomers had previously suggested there should be myriad dual quasars during that time, but none had been detected until now.

Related: Distant ‘quasar tsunamis’ are ripping their own galaxies apart

“This truly is the first sample of dual quasars at the peak epoch of galaxy formation with which we can use to probe ideas about how supermassive black holes come together to eventually form a binary,” Zakamska said.

The discovery of these four quasars not only informs researchers on the merging of supermassive black holes in the early universe, but also highlights the benefits of employing a variety of techniques to detect and image elusive dual quasars, study team members said.

Although Hubble is the only telescope with a high enough resolution to distinguish these two close quasar pairs, its sharp eye wasn’t quite good enough to locate them on its own. Astronomers needed to point Hubble in the right direction, and for that they enlisted the help of the European Space Agency’s star-mapping Gaia satellite and the ground-based Sloan Digital Sky Survey to compile a list of possible candidates for Hubble to investigate.

When the researchers then observed the first four targets with Hubble, they found that two of the targets were actually two pairs of close quasars. The researchers said it was a “light bulb moment” that reaffirmed their plans to use Hubble, Sloan and Gaia to search for quasar duos.

“The new technique can not only discover dual quasars much further away, but it is much more efficient than the methods we’ve used before,” said Xin Liu of the University of Illinois at Urbana-Champaign, who was also part of the study.

The team’s research appears in the April 1 online issue of the journal Nature Astronomy.

Join our Space Forums to keep talking space on the latest missions, night sky and more! And if you have a news tip, correction or comment, let us know at: community@space.com.