The streaming services are getting thematic, and the resulting battles are fierce. Hostile neighbors on Amazon Prime go up against nefarious forces on HBO, and there are (once again) warring superheroes on Disney+ (The Falcon and the Winter Soldier), Netflix (Thunder Force), and Amazon Prime (The Invincibles). We’re so incredibly lucky to have such an abundance of escapism inside our living rooms each weekend, but we must focus on the task at hand: naming the streaming service that gives you the most for your dollar. As always, it’s a tough call to make, but the results are unusual because Netflix surprisingly doesn’t make a huge mark in the fight to the top of the pile.

Instead, HBO Max comes out ahead this weekend with three highly entertaining series to stream and some bonus John Oliver. Amazon Prime manages to come in strong with a new series that will remind you of a certain Jordan Peele movie. Disney+ continues to prove itself a formidable contender with two series that are offering fresh episodes each week. And don’t count out Hulu (with all those next day FX offerings), Peacock (with a new true crime miniseries and a growing library), and AMC+. Here are all the makings of a fine streaming weekend. 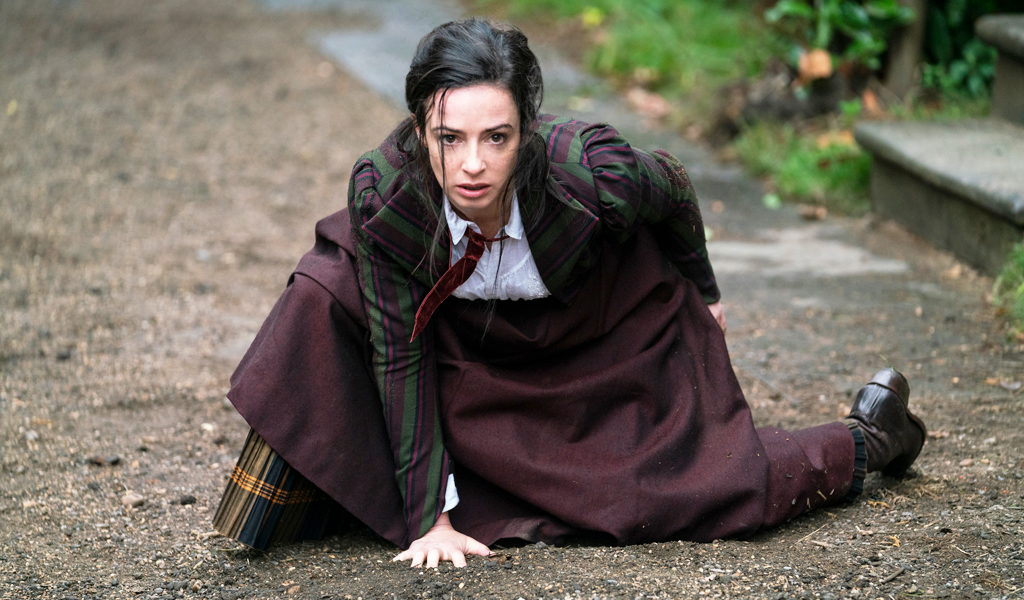 The Nevers (HBO series streaming on HBO Max) — This Joss Whedon-created show offers an intriguing setup about a group of “orphans” (almost exclusively women) who find themselves “gifted” with supernaturally-powered abilities. Although there’s far too many plot lines (and some plot holes), there’s also a fair amount of butt-kicking, and the atmosphere is killer. The embattled Buffy and Firefly creator officially exited the series last year, but you won’t be able to forget his presence. Whether that hurts or helps the show remains to be seen.

Exterminate All The Brutes (HBO series streaming on HBO Max) — This four-part documentary series tells a story of survival with a powerful message. Prepare to witness a search for truth and an scrutinization of how history is written, and expect to watch this show while reexamining much of what you thought you knew about European colonialism, American slavery, and Native American genocide. This week, Parts 1 and 2 revisit the U.S.’ legacy as a colonial power, including stories of Christopher Columbus and Trail of Tears, as told from an indigenous perspective.

Q: Into the Storm (HBO series streaming on HBO Max) — You’ve heard all of those wild QAnon conspiracy theories, and it’s a great time to catch up after the series concluded last week. Filmmaker Cullen Hoback drives into the rabbit hole to reveal how the mysterious “Q” wields conspiracies as information warfare to manipulate thinking and influence American culture. In the end, this series will touch upon the Internet’s darkest corners and explore how “unfettered free speech” (according to the synopsis) can go to dangerous places.

Them (Amazon Prime limited series) — This story’s sure to remind horror fans of Jordan Peele’s Us in more ways than a few, and for good reason. This show promises to explore American-bred terror with an anthologized approach, so the first season is all about the 1950s. Allison Pill’s reliably frightening, and here, she’s terrorizing a Black family, who moves into an all-white LA neighborhood and the welcome committee isn’t there for them, that’s for sure. Soon enough, the horror show begins; and both from a reality-based and a supernatural standpoint, this is pure nightmare fuel.

Invincible (Amazon Prime series) — This animated romp drops a new episode and pleases both fans of The Boys and The Walking Dead, and the latter reference has everything to do with the source material by Robert Kirkman. Invincible is an ultraviolent deconstruction of the superhero, and yes, we’ve seen plenty of dismantling already, but this story has heart. Stephen Yeun makes a fantastic leading man here, and the cast (J.K. Simmons, Sandra Oh, Seth Rogen, Walton Goggins, Jason Mantzoukas, Zazie Beetz, Zachary Quinto, Mark Hamill, and several TWD names) is ridiculously good.

The Falcon and the Winter Soldier (Disney+ series) — Sam Wilson and Bucky Barnes are still doing their buddy action-comedy thing, and last week, Sharon Carter finally arrived to kick ass and sprinkle her newly jaded attitude among the cast of characters. This week, Zemo might be in for a rude awakening after Ayo (of Wakanda) tracked down Bucky. The Flag Smashers are still proving to be confusing villains, and Faux Captain America is hanging out somewhere. We’re past the halfway point now, so things should start to come to (even more of) a head soon.

The Mighty Ducks: Game Changers (Disney+ series) — Emilio Estevez is back in this new-generation revival of the classic films. Co-starring Lauren Graham and Brady Noon, the Mighty Ducks junior hockey team is now a powerhouse in its division, and it’s brutal in selecting who can make the cut. Estevez is still the Ducks’ original coach, and he’s helping a new team of underdogs after the New Ducks boot a 12-year-old boy.

Mayans M.C. (FX on Hulu) — This biker drama’s in a darker third gear with the club all wrestling with various personal and professional demons. This week, Bishop’s working on the club’s supply issues, and EZ gets closer to his new lady friend.

Snowfall (FX on Hulu) — The John Singleton-co-created series sees Franklin confronted with chaos while Teddy is attempting to row upstream.

Breeders (FX on Hulu) — Martin Freeman’s starring turn in this comedy enters the sophomore season with new parenting challenges. This week, sudden death strikes the Worsley family while Ava struggles with telling Paul something, and Ally’s attempting to confront her feelings for Luke.

Gangs of London (Sky Atlantic/AMC+ series) — AMC+ viewers who already enjoyed the first season of this series and may even be tempted to revisit the turbulent power struggle all over again as it hits the traditional TV schedule. Fans of the beloved Peaky Blinders, as well, should pay attention because this new series makes Peaky seem like a pleasant walk in London’s Hyde Park. Warring gangs and a power vacuum and a city on its knees are only part of the attraction here. The rest is down to character-based writing and a wonderful cast that embodies a decidedly unglamorous take on warring criminal elements, all of which will prove to be addictive for anyone who loves The Sopranos or any of Marty Scorsese’s mob pictures.

Fear the Walking Dead: Season 6B premiere (AMC series on AMC+) — Against all expectations (and the audience’s experience), this zombie-series spinoff transformed itself and surprised the hell out of even die-hard fans of The Walking Dead universe. The storytelling has shifted to a character-based approach (and an isolated one at that, often focusing on finishing journeys before credits roll), and almost as importantly, there’s now a formidable villain in the mix, courtesy of Colby Minifie as Virginia. Can the show continue to sustain its current momentum? The franchise’s fans sure hope so, as other spinoffs warm up in the background.

John Wayne Gacy: Devil In Disguise (Peacock miniseries) — The NBCU streaming service is stepping into the true crime game with a six-part series about one of the most terrifying and notorious serial killers. The docuseries will contain a full-on interview with the subject from prison while presenting accounts from an ex-wife, a confidant, and other exclusive interviews. Prepare to be horrified and riveted and afraid to turn out the damn lights at night.

Thunder Force (Netflix film) — Don’t expect this movie to win any awards because that’s not the point. Instead, prepare for the silliest of moments from Melissa McCarthy and Octavia Spencer as two inept superheroes who fight crime, long after their childhood best-friend days, and together, they learn what it’s like when two ordinary people are suddenly tasked with stopping supervillains. In other words, sit back and embrace the chaos because there’s plenty of it coming your way. The supporting cast includes Bobby Cannavale, Pom Klementieff, and Melissa Leo. Plus, Jason Bateman is onboard, which instantly makes any movie or TV show better

This Is A Robbery: The World’s Biggest Art Heist (Netflix documentary series) — This docuseries goes big while digging into a $500 million stash of missing art and a $10 million reward for the lucky person who finds it. The mystery sources back 30 freaking years after two thieves pulled off the greatest art heist in history in 1990 Boston, and investigators are now tracking the cold case in an attempt to uncover legendary works by Rembrandt, Vermeer, and more. Get ready for dead ends and lucky breaks aplenty.

Dolly Parton: A MusiCares Tribute (Netflix film) — Even before Dolly helped fund research that led to one of the COVID-19 vaccines, she was beloved, as she very well should be. This special showcases the never-before-seen 2019 Person of the Year event and concert that celebrated this national treasure.

The Wedding Coach (Netflix film) — All of those cancelled weddings from last year are going to have a spiritual reawakening with this show, which dives into the hell of planning. Comedian Jamie Lee piggybacks from her own wedding to help couples “survive” the ridiculousness of “Big Bridal.” It’s real talk with Lee attempting to help people see the bigger picture.

Source: What Streaming Service Offers The Best Options This Weekend?

Bartenders Shout Out Their Favorite Gose Beers For Spring