After yet another Black man was killed by police in Minnesota, people in a Minneapolis suburb took to the streets this week to protest, standing face-to-face with law enforcement as they were met by stun grenades and tear gas.

The protesters were showing solidarity with Daunte Wright, the 20 year old who was shot during a routine traffic stop, just a 10 minute drive from where Derek Chauvin is currently on trial for the death of George Floyd.

One after another, protesters and residents told VICE News that what started out as anger and frustration last summer after Floyd’s death has turned into something even more traumatic for the local Black community. People on the ground in Minnesota say they’re not just frustrated with a broken policing system, they’re afraid for their lives. 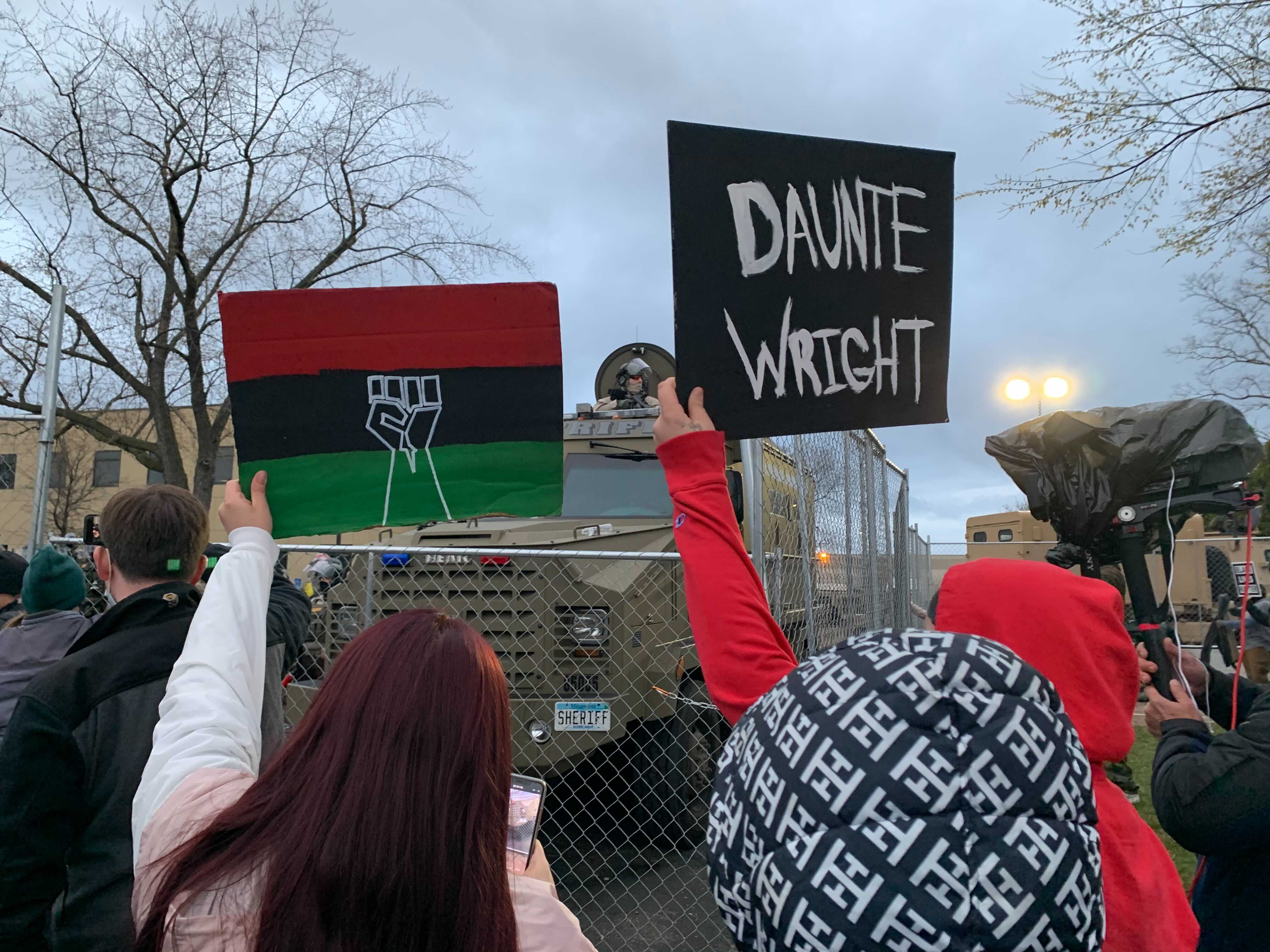 Protesters raise signs during a protest against the police killing of Daunte Wright on April 14, 2021. An armored truck and a National Guardsman sit in front of them. (Samir Ferdowsi)

Tyler was one of hundreds who protested outside of the Brooklyn Center Police station this week after authorities released body camera footage showing Wright’s fatal shooting.

In the footage, Kim Potter, the now-former cop who shot Wright, can be heard yelling, “Taser, Taser, Taser!” before firing her pistol. Potter is now facing second-degree manslaughter charges. The fact that she was a 26-year veteran of the force, Black protestors said, perpetuates one of their fears—it doesn’t matter if a cop is a rookie or a veteran, they still targeting Black Americans.

“I have six brothers, 15 nephews, it could have been one of them—I live in a constant state of fear,” said Crown Shepherd, a 33-year-old resident of Minneapolis. “Every time I get in my car and drive anywhere, it’s fearful because I could get pulled over and in that moment I could lose my life. I fear driving all the time.” 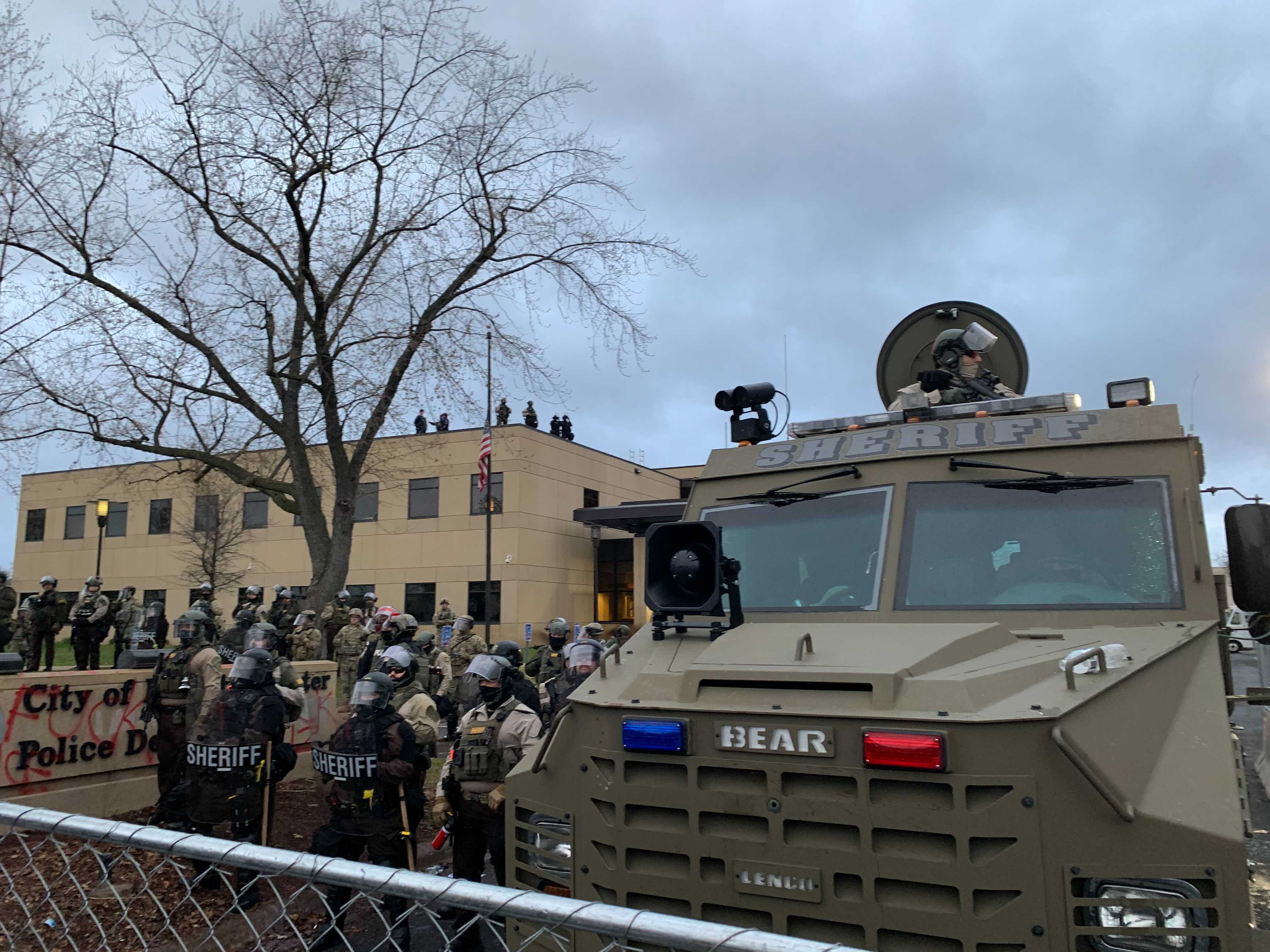 Law enforcement surrounds the Brooklyn Center Police Precinct on April 14, 2021. Many were outfitted with riot gear, tear gas launchers, and flashbangs throughout the week of protests. (Samir Ferdowsi/VICE News))

Shepherd said living in Minnesota specifically has taken a mental toll on her family because of the constant threat of police violence in her community. She said she wants systemic change that begins with government officials acknowledging the racism that Black people and other minorities face. The activist said her family’s life depends on it.

“I fear for my brothers and my nephews every day because they live in this world as Black men, and there’s nothing they can do about that,” Shepherd said. “One day I may wake up to a headline that is one of my brothers, my nephews, my cousins, it’s my family members. It happens all the time and it’s not new to people in Minnesota.” 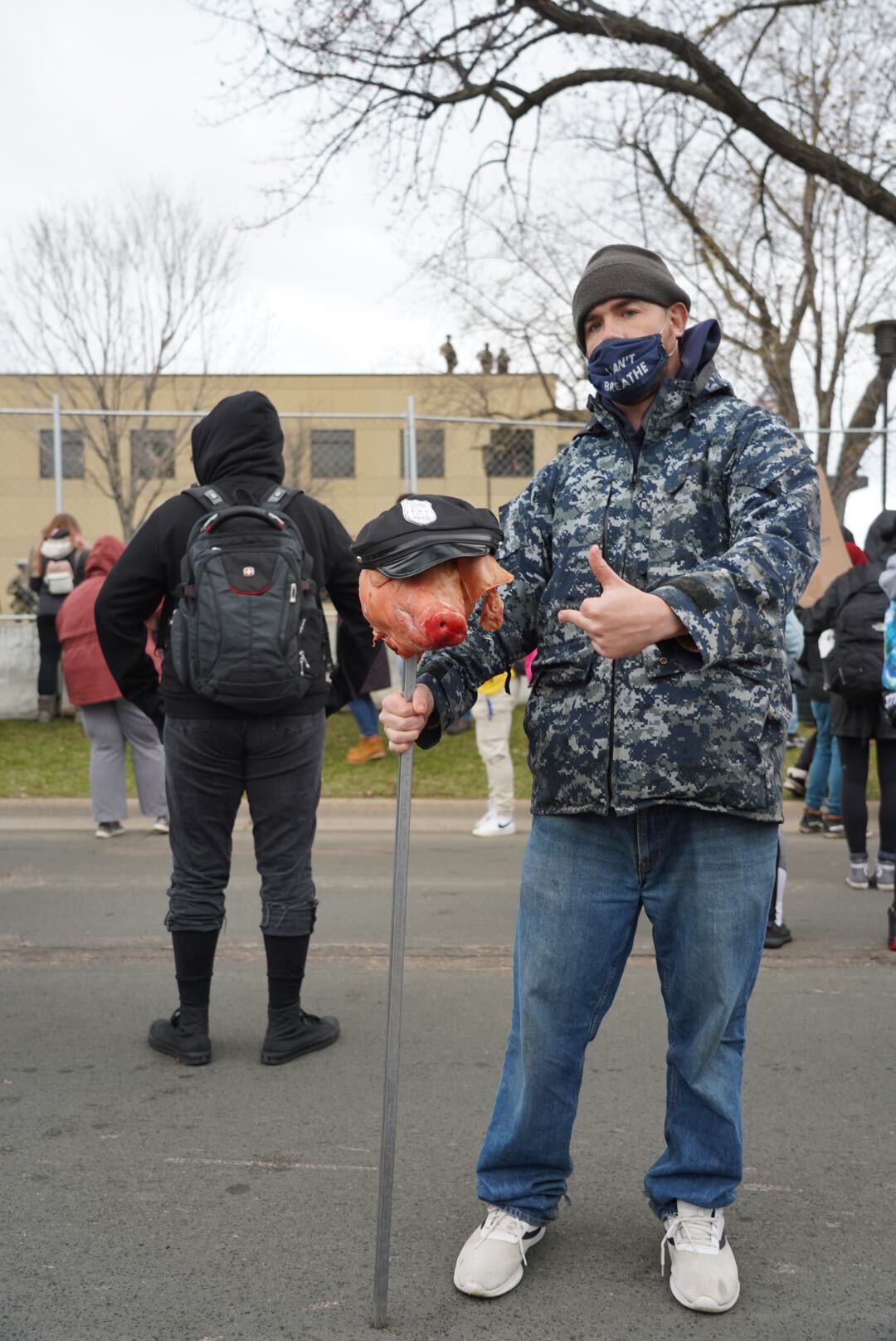 A protester holds a skewered pig’s head on a metal pole outside the Brooklyn Center Police Precinct on April 14, 2021. Throughout the week, protests took place in the area. (Samir Ferdowsi/VICE News))

The killing of Wright comes less than one year after the death of Floyd, who died after now-former Minneapolis Police Officer Chauvin kneeled on his neck for more than nine minutes. Chauvin’s trial is ongoing, and jurors could reach a verdict as early as next week.

But no matter what the trial’s outcome, people in Minneapolis say they plan to continue protesting against racism and police brutality.

All this week, protesters in Brooklyn Center were met by National Guard and police, who shot rubber bullets and tear gas into crowds. Several people were pinned against apartment buildings that housed families and young children. Many said that it’s hard to envision a different reality until the state takes up major police reform, like abolishing qualified immunity, and establishing community-based policing.

“I worry for my kids, they’re brown—it doesn’t matter if you’re anything but white. I’m really scared, but at the same time I feel like I have to be here,” a protester who goes by “Dee” said, after running away from clouds of tear gas coming from the police line about 20 yards away in front of the Brooklyn Center police precinct on Monday, April 12.

She was also disappointed by a lack of support from local leaders and government officials, who condemned the damage to property, but had little to say on the death of Wright. “A lot of people say that we shouldn’t be here and it’s sad because they just don’t care.” 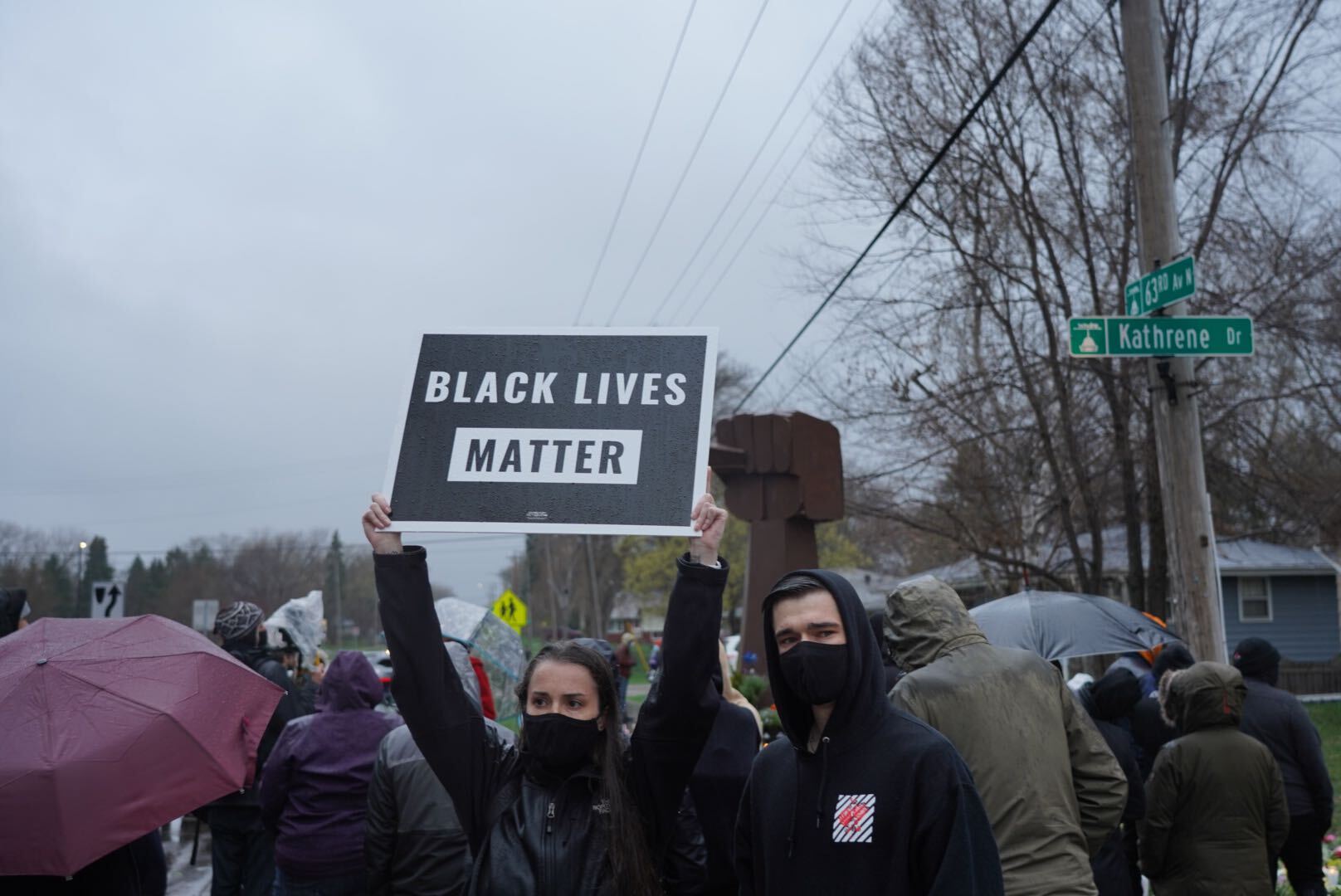 A group of mourners stand on the corner where Daunte Wright was shot in Brooklyn Center, Minnesota on April 12, 2021. A Black Power fist statue was placed on the curb at the memorial. (Samir Ferdowsi/VICE News)

Despite 7 p.m. curfews, protests still managed to come out in big numbers.. The scene was often a surreal mix of free barbeque and music, next to heavily-armed National Guard and police officers who stood behind concrete barricades. In some instances, police stood on rooftops looking down over the crowds.

On Monday, while protesters shouted and raised their fists in front of the police precinct in Brooklyn Center, a vigil a few miles down the road had a more somber and reflective tone. Rain and snow fell in the evening as Minnesotans placed LED candles at the scene where Wright was shot. Few people said any words, and instead hugged each other and cried. Some placed flowers next to several community-constructed monuments. 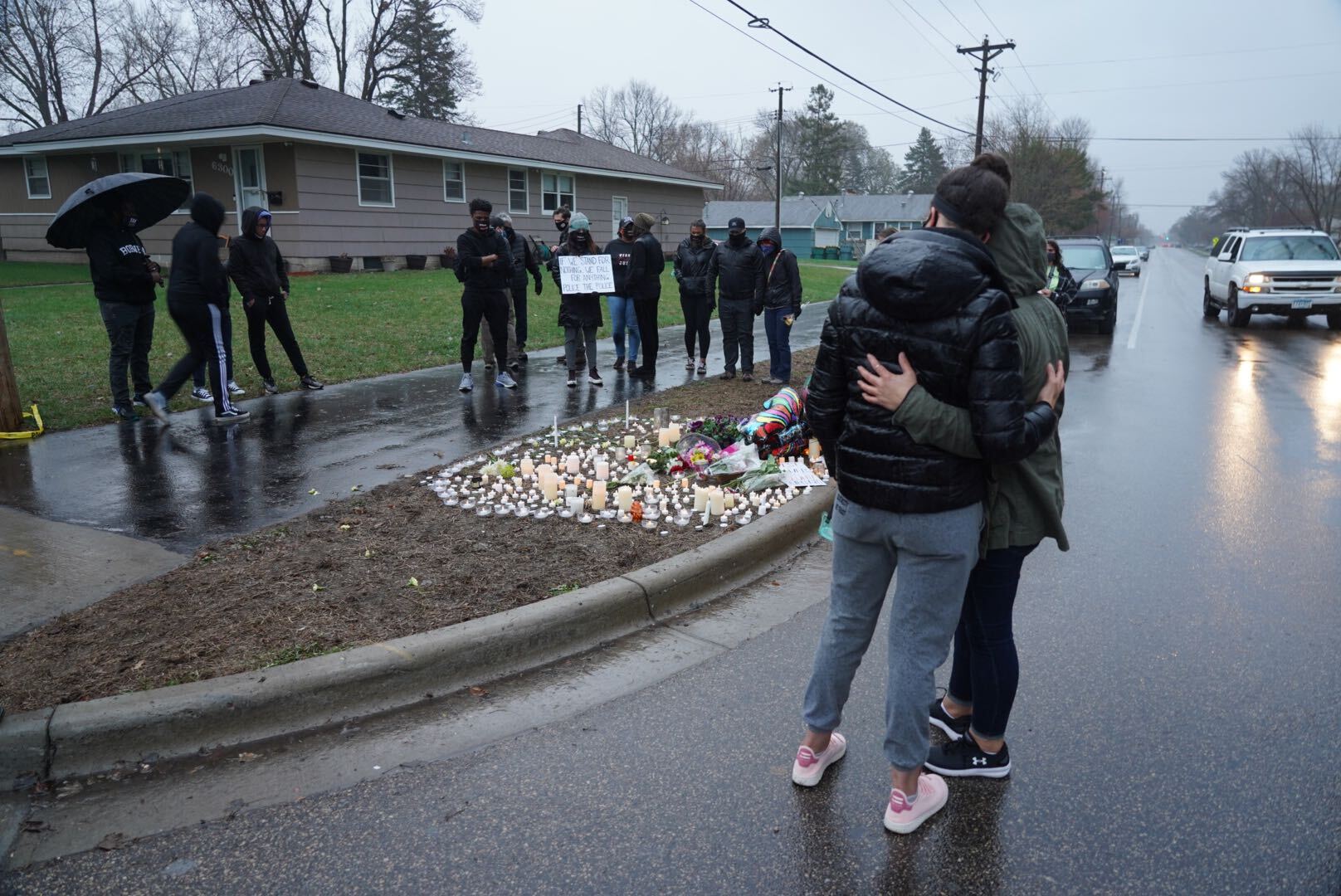 Two mourners embrace on April 12, 2021, one block away from where Daunte Wright was shot and killed. As people came to the vigil, they brought LED candles and flowers. (Samir Ferdowsi/VICE News)

Back in front of the police precinct, one local resident who goes by “Ebby” said that community action, like protesting, was the only way to be heard.

“Me being a person of color, I’m scared of getting pulled over and just every interaction with the police. You can be a nice person, and yet be the next person on the news, lying on the ground dead for hours without anybody caring. I could be the next person with a knee on my neck. That’s scary,” he said.