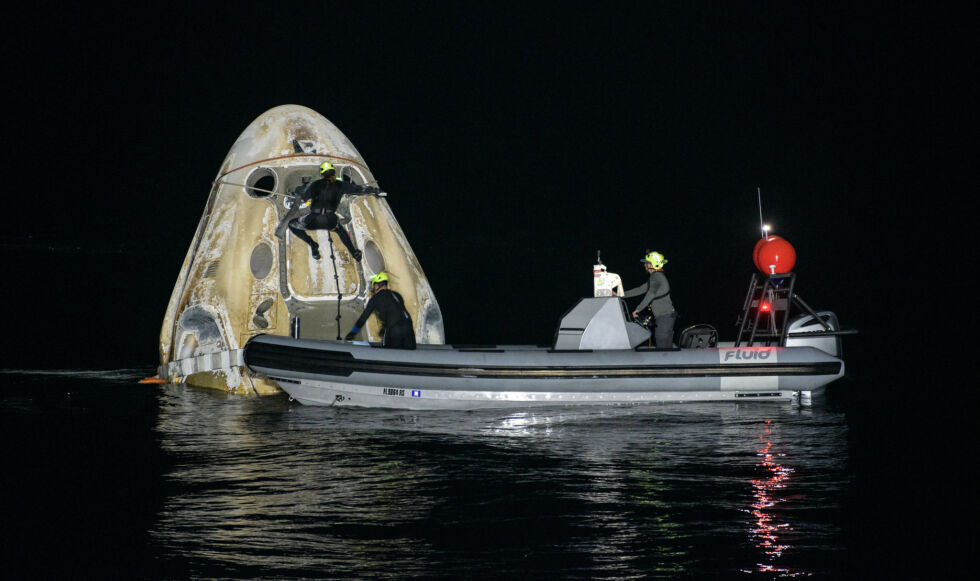 How to recover a Dragon after dark. [credit:
NASA ]

After a little more than 167 days in space, and zipping through 2,688 orbits around the planet, Crew Dragon Resilience dropped into a darkened Gulf of Mexico early on Sunday morning off the coast of Panama City, Florida.

The flight back from the International Space Station went smoothly, with Dragon entering the atmosphere about 12 minutes before landing under four main parachutes. Shortly after entering the atmosphere, an infrared camera aboard a WB-57 aircraft was able to track the vehicle as it guided down to the surface. Sea states were remarkably calm as the vehicle, which resembled a toasted marshmallow following its rigorous reentry through Earth’s atmosphere, was hoisted aboard the GO Navigator recovery boat.

Inside, NASA astronauts Mike Hopkins, Vic Glover, and Shannon Walker, along with Japanese astronaut Soichi Noguchi, were healthy and happy after spending nearly six months living aboard the International Space Station, and feeling the effects of Earth’s gravity again.