When Air Force two-star general DeAnna Burt joined the Space Force, she was flanked by familiar faces from a certain Galactic Empire. A Stormtrooper stood at attention, a Scout Trooper at one side and the garish red of the Emperor’s Royal Guard on the other. And next to them all was Darth Vader. Later, Maj. Gen. DeAnna Burt—who is now Combined Force Space Command commander, addressed the audience while Boba Fett lingered in the background.

The swearing in ceremony was part of a wider celebration on May 7 that marked International Space Day. It happened at the Vandenberg Air Force Base in California (they missed May the Fourth Be With You by a few days). There was a cornhole tournament and a rocket design and launch competition. As the festivities went on, members of the 501st Legion, Vader’s First, mingled with the crowd.

The 501st is a professional Star Wars cosplay group that focuses on accurate recreations of the movie’s troops. It’s a charitable organization with an endowment from the Make a Wish foundation. It makes sense to send Darth Vader to spend time with sick kids. It’s decidedly weirder for Darth Vader to stare down a Major General while she is sworn into the Space Force. 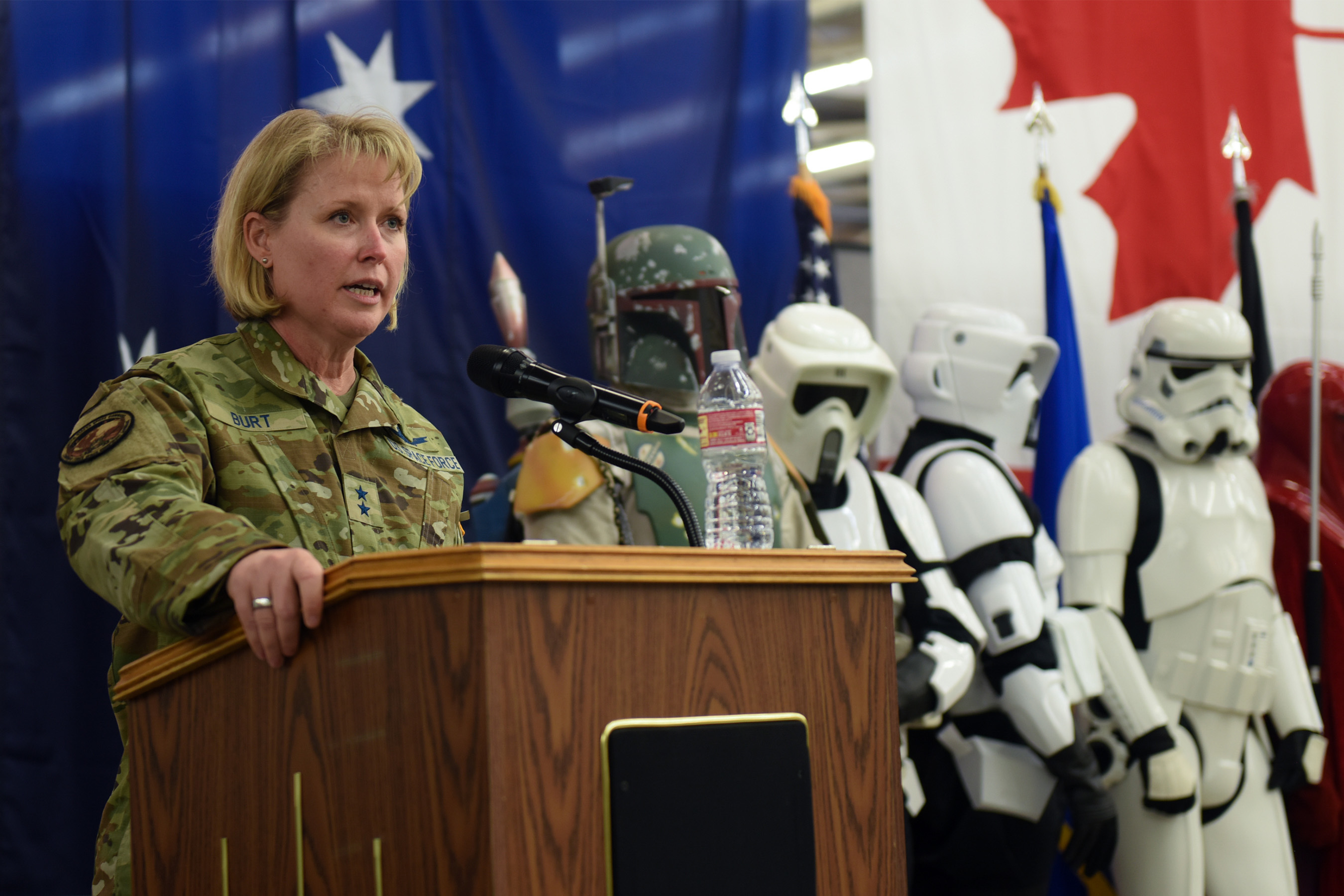 But here’s the thing. The U.S. military loves Star Wars. The Facebook pages and assorted online photo repositories of America’s military bases are littered with soldiers, airmen, sailors, and Marines dressed like Stormtroopers and Jedi. Well, mostly Stormtroopers. Aside from a base in Africa that flew the flag of the Rebel Alliance, the Pentagon overwhelmingly loves to front for the Empire.

It makes sense from a certain aesthetic point of view. The Dark Side of the force is a pathway to many bad ass costumes that some consider to be…unnatural. A Stormtrooper is easily recognizable. Does the motley dress of Nik Sant’s uniform during the Battle of Endor evoke anything at all? Do you even know who Nik Sant is? No. No one knows how Nik Sant is.

The Empire signals power and domination in its actions and aesthetics. The Galactic Empire was consciously designed by series creator George Lucas to remind people of the American Empire and it makes sense that the Pentagon would naturally gravitate towards it, aside from the fact that, well, they are the bad guys.

Motherboard reached out to Space Force to see if it officially endorsed the Dark Side of the Force but did not hear back. “The costumed volunteers were not part of the swearing-in ceremony,” U.S. Space Force spokesman Mike Pierson told Task & Purpose of the event.

Which is odd, given that they’re in every picture of the event and standing at attention during the swearing in ceremony.